Build Your Network with Business First

This workshop is perfect for anyone who would like to brush up on his or her networking skills and learn how to make valuable connections at any networking event. Featuring AmSpirit Business Connections founder, Frank Agin. For information or to register go to: http://www.bizjournals.com/columbus/event/87031

To be a successful businessperson, you need to network yourself. Great networking, however, requires a multi-faceted attack. There is structured networking like business-referral groups (such as AmSpirit Business Connections), trade association meetings, and other organizations. In addition, there are networking events, like trade shows, business after-hours, and open houses. There is also free-form networking, such as going to lunch with someone, meeting up for coffee, or hitting the golf course.

In the 21st century, however, there is another important facet to great networking. This is taking advantage of social media, such as LinkedIn, Facebook and Twitter. If you find that you shy away from networking on social media applications like LinkedIn because you really don’t understand how to make the best use of it, read Networking On LinkedIn For The Successful Businessperson, an article written by author, consultant and founder of the AmSpirit Business Connections franchise opportunity, Frank Agin (frankagin@amspirit.com). 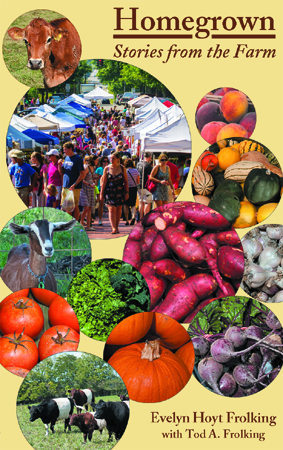 Evelyn Frolking of Artiflora and member of the Granville Chapter of AmSpirit Business Connections launches book, Homegrown: Stories from the Farm. Homegrown, includes stories about six different Ohio farmers and Granville and Licking County are highlighted throughout the book.

The book signing is this Thursday, February 21 at 7:00 PM at the Granville Inn. More more information on the book, to see endorsements or more details on the singing visit http://www.amspirit.com/files/evelyn-frolking.pdf

Let’s face it, the number one aversion to professional networking is … not time, but fear. It can seem so intimidating to walk into a room of (many) strangers. As a result, we might not. According to Angela Wild in her blog post Business Networking … Not as Scary as It Sounds, there is less to fear than we might have once, well, feared. Read On!

Jay Schuermann with EOE Furniture and a member of the Montgomery Chapter of AmSpirit Business Connections was chosen to be the team leader of the Rotary Clubs Group Study Exchange trip to Nigeria. Jay has been a member of the Rotary Club for over 30 years. He served as President of the club in 2008 and was a board member for 3 years. Jay also served on the Foundation board which uses its proceeds to support children with special needs in the Cinncinnati area.

This is a great opportunity for prospective team members who are in seek of an international adventure. The trip will take place in May and last 30 days. All expenses are provided by the Rotary excluding personal items. Team members are to be non-Rotarians between the ages of 25-40 and gainfully employed.

Not only did the Mentor Chapter have a great year from an Outstanding Chapter perspective, but it was noticed for this accomplishment as well. CLICK HERE to read The News Herald article about them.

What is the best way to conduct yourself in social media? That is the subject of much debate. Tony Restell nails the answer in his Social Hire blog … Social Networking: Are You Working The Room? Read On!

Camp Fire is a national youth development organization with a primary goal of getting kids out into nature. Our council owns a the beautiful Camp Wyandot in Hocking County.  We were formed in 1910 as Camp Fire Girls in response to the Boy Scouts for boys. We went co-ed in the 70’s.

To learn more about Camp Fire and their efforts visit: http://www.centralohiocampfire.org/camp/camp-wyandot-sleep-away-camp/

“Light The Fire Within”

In addition to being a knowledgeable business attorney in the Port Columbus Chapter of AmSpirit Business Connections, Eileen Paley is a member of City Council for the City of Columbus. Through this capacity as a city leader, she has helped create the Columbus KickStart program.

This program is more or less a contest where Columbus area businesses submit their business plan for consideration. Up to three will be selected and given free office space in downtown Columbus (281 S. Third Street) along with other prizes (including a free one-year membership in AmSpirit Business Connections). In addition the City of Columbus, Councilmember Paley has involved ECDI, Capitol South and Capital Crossroads SID.

How much is enough networking? Where does the Law of Diminishing Returns take hold? These are a couple good questions that Jacky Sherman with the Northampton Referral Institute addresses in her blog post. Read On!